Bank of Uganda (BOU)  has issued a statement that foreign banks lending deposits held in jurisdictions other than Uganda are regulated and supervised by their home authorities, and it is not mandatory for a foreign bank to establish a representative office in Uganda in order to conduct lending or non-deposit-taking activity. (Read full statement below)

“Bank of Uganda’s regulatory and supervisory powers only apply to financial institution business conducted by BoU licensed entities in or outside Uganda or activity which should be licensed as such in Uganda. These powers do not extend to activities of foreign banks outside Uganda licensed by foreign regulators,” said BOU Governor Emmanuel Tumusiime-Mutebile in the statement.

The Bank of Uganda statement released in the early hours of Wednesday comes a week after the High Court Commercial Division ordered Diamond Trust Bank (DTB) Uganda and Kenya to refund more than sh120 billion, that court ruled was illegally deducted from two accounts of businessman Hamis Kiggundu.

In a dramatic week in the banking sector, Diamond Trust Bank Uganda and Kenya soon after filed a notice of appeal challenging the Commercial Court decision directing them to make the refund.

In the notice, the two banks through their lawyers of K & K Advocates note they are not contented with the ruling by Justice Henry Peter Adonyo.

In August 2020, Kiggundu petitioned the court after sh85 billion and sh34 billion were deducted by DTB Uganda and DTB Kenya from two accounts of his companies “without his knowledge and consent.” The companies are Ham Enterprises and Kiggs International Uganda Limited.

Documents indicate that between 2011 and 2016, Kiggundu through the two companies acquired loans totaling to sh41 Billion from DTB Uganda and Kenya to finance his real estate businesses on condition that he mortgaged his properties in Makerere Hill, Kawuku, Kyadondo and Victoria Crescent Road among other plots of land.

However last year, the banks reportedly served him with documents indicating that he has not met his loan obligation worth sh 39 billion as per their agreement and threatened to take over the properties he had mortgaged. As a result, Kiggundu petitioned the commercial court saying that the money that was withdrawn from his dollar and shillings accounts were excess yet he had also fully paid the loan.

Through his lawyers of Muwema and Company Advocates, Kiggundu asked the court to declare that all the loans he obtained have since been paid and also issue an order of refund of the money obtained illegally in the aftermath.

Last week, the head of commercial Court Justice Adonyo ruled that DTB Uganda became a principal offender by facilitating the commission of an offence by allowing DTB Kenya which did not have a license to operate in Uganda to do financial businesses in the country.

Adonyo said the banks which were represented by city lawyer Kiryowa Kiwanuka needed to be penalized by their illegal actions and that they did not have any defence whatsoever for withdrawing the businessman’s money without his consent yet he had fully paid the loans. Adonyo ordered the two banks to refund all the money that he ruled was illegally taken from Kiggundu’s accounts amounting to sh34 billion and 23m dollars (sh85 billion) immediately.

The court also ordered the two banks to return all his land titles citing that the evidence on record indicates that all the loans the businessman had obtained from DTB Uganda were fully settled. The two banks were also ordered to pay Kiggundu an interest of eight per cent of the money as well as costs for the suit.

Reactions to the ruling

On its part, the Uganda Bankers Association says the judgment has sent shockwaves across the industry and stakeholders especially regarding syndicated loans. The syndicated loan portfolio, or loans that two or more banks jointly give to a borrower, currently stand at 5.7 trillion Shillings or USD 1.5 billion, with the government as the biggest beneficiary.

They assert that the ruling also sent shockwaves to the banking sector’s international lenders who might change their attitude towards Uganda. UBA fears that this decision also sets a bad precedent as other such borrowers might take similar actions.

In a statement, UBA is now rallying all government business facilitation agencies like Uganda Revenue Authority, Uganda Investment Authority, the Ministry of Finance and the Judiciary, as well as the private sector agencies to; “join us in addressing the implications of the judgment and assist in avoiding the adverse effects” of the judgment on the economy and the country. 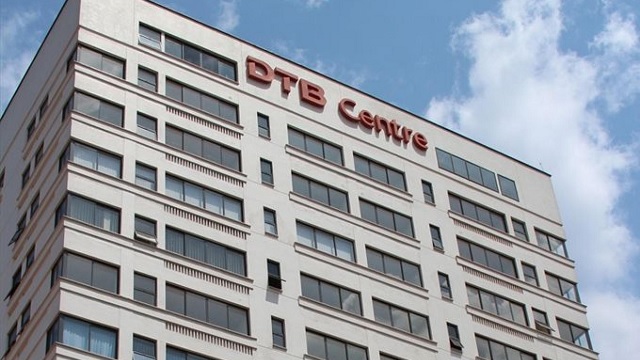 The Commercial Court judgment will have wider repercussions across the entire economy in terms of the cost of credit, experts said this week.

Speaking during a ZOOM meeting on Saturday evening to discuss the case amongst Uganda’s finance professionals and legal fraternity, Muhumuza said Uganda has limited capital, adding that it has been the practice for local banks to seek capital from abroad for local borrowers.

He said should the judgment stand, it will have a big impact across the entire economy including the insurance sector.

The judge rejected the argument from the respondents that DTB Kenya had appointed DTB Uganda, which is licensed to carry out business in Uganda to act as their agent.

Muhumuza says this will cause a jump in the cost of credit if financial institutions are unable to use the same arrangement to source foreign funding.

Dennis Otatiina, the Managing Partner of KO Advocates said Uganda is a prime destination for foreign capital to finance all kinds of projects including trade. He says if the appetite for foreign capital is to continue, then the regulation needs to be measured and the Bank of Uganda has to do something about the judgment.