Eyalama In Entertaiment, Sports On October 26, 2018

Manchester United return to Premier League action on Sunday sitting 10th in the table and facing a trip to take on an Everton side that have won three games on the bounce.

Romelu Lukaku is eight games without a goal, the attacking display in the loss to Juventus was as anaemic as ever and Jose Mourinho remains a man under fire.

The Portuguese has been criticised by former midfielder Paul Ince, who says United are going “backwards”, that Mourinho should “expect the sack” and is “out of excuses”.

With just five wins in all competitions, United are desperate for three points at Goodison Park, having already fallen seven points off the top five.

Will Lukaku keep his place? What does Mourinho make of Ince’s comments? And how does he see the weekend clash panning out?

Lingard could feature this weekend

“Can he help us in the next match?

“That’s the question we have to answer tomorrow, or wait one more week.”

‘No option’ but to play Lukaku

Mourinho feels he also has little option to play Lukaku as his No.9.

He says Sanchez is still injured and he prefers to use Rashford out wide.

“If we decided to give a rest to Lukaku and play Rashford, then who plays as a winger?

“We are not in the best moment to try to think about resting players or try to find solutions, the solutions is to use the players we have.”

“One day will be the game and one day he will score and one day his confidence levels will be back to normal, which clearly they are not, but I always feel that.”

No return for Zlatan

Jose Mourinho has ruled out a return for Zlatan Ibrahimovic to solve Manchester United’s goalscoring problems, insisting he has total faith in Romelu Lukaku.

Lukaku and United’s other strikers – Anthony Martial, Marcus Rashford and Alexis Sanchez – have managed just 10 goals between them this season.

Mourinho has been linked with bringing back Ibrahimovic, who has successfully rehabilitated himself at LA Galaxy, but he insists the Swedish star will not be coming back to Old Trafford.

When asked if he would re-sign Ibrahimovic, Mourinho said:

Here we go then.

Jose should be out shortly to speak.

Plenty of issues for him to discuss.

What will he choose to say?

What will he choose to omit?

A group of Manchester United players reportedly fused to take part in sponsorship activities on Thursday.

Several of Jose Mourinho’s squad were due to attend an event for the club’s commercial partners but pulled out in protest at the club’s shocking transport situation.

The Mail reports the players were making a point after the late arrival for the last two Champions League matches at Old Trafford.

United were fined by UEFA after arriving late for the clash with Valencia, which forced the standard 8pm kick-off time to be pushed back.

And despite moving to a hotel closer to the ground for the defeat to Juventus this week, United only got there after 7pm.

Boss Jose Mourinho even chose to walk a part of the journey such was the travel chaos in and around Old Trafford.

The players set to attend Thursday’s monthly event are said to have cited transport issues after failing to turn up.

It is believed to be a one-off with a separate group in attendance at Victoria Warehouse for the launch of a clothing collection.

Manchester United are set to complete the signing of shot-stopper Paul Woolston after a successful trial period at the club.

The 20-year-old was released by Newcastle but the Red Devils have seemingly been impressed by his abilities. In particular, Woolston’s distribution has caught the eye of United’s coaches.

Woolston isn’t the tallest, however, standing at around 6ft – which is one of the reasons why he was let go by the Magpies.

But he has impressed United coaches and will vie for a place in the U23 side.

Victor Lindelof has been talking to Inside United, the club magazine.

Here’s what he has to say on his current run in the side, and the team’s fortunes.

“I feel good. I’m always happy when I play. I always want to help the team and contribute in any way I can. It’s always good for me to play so I’m very happy at the moment.

“Not with the results, but I want to keep on going to try to help the team in the way that I can.

“A lot of players take time to adjust. I feel good. All my team-mates are very, very good and I feel very comfortable with everything around it.

“I think this season is hopefully going to be better than last season – for the team and also for myself.”

Let’s hope it is, United fans! 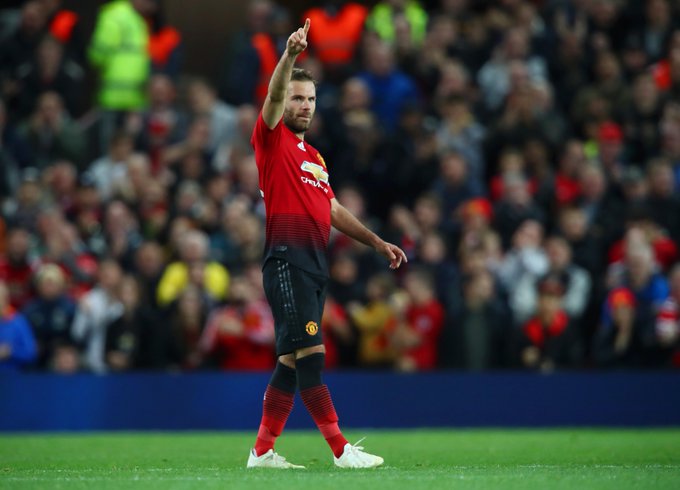 It could be a big weekend for @JuanMata8! #MUFC

Gary Neville has hit out at the ‘inconsistency and lack of strategy’ behind Manchester United’srecruitment process.

The Red Devils have spent in excessive of £550million since Sir Alex Ferguson retired in 2013, and aside from one Europa League trophy and the EFL Cup, the club have little to show for it.

What’s more, David Moyes and Louis van Gaal have both been sacked unceremoniously as United go in search of perfection, and current boss Jose Mourinho is feeling the heat.

Neville has previously complained about the problems at the club, and has once again reiterated that he believes they stem from above.

“A lot of money has been spent on that United team. The reality is the recruitment has been poor for four or five years.

“There has been no consistency, strategy behind the recruitment. You have three or four different managers and different styles of managers’ players in the same squad, where the club should always sign players that fits their profile.

“And then if the manager leaves, you will always have players who believe in the club system.

“And at the moment, I do not see that, you have a collection of different players from different managers who believe in different things and Jose is trying to work them into a unit and he is finding it very difficult.”

Alexis Sanchez, Marouane Fellaini and Jesse Lingard are among the men currently absent.

The trio all missed the loss to Juventus on Tuesday.

Will any of them return against Everton – Fellaini’s former club of course.

What about Antonio Valencia?

We await Mourinho to update us…

Juventus’ confidence is growing that they can be the ones to lure Manchester United’s David De Gea away from Old Trafford.

The goalkeeper has still not signed a new contract with the Premier League club.

According to the Sun, the Old Lady are batting their eyelids at the Spanish stopper – and the 27-year-old’s agents are open to the idea.

De Gea is out of contract in the summer, but United do have the option of extending for a further year.

All things considered, this has to be a major worry.

ROMELU LUKAKU is not to blame for Manchester United’s form being patchier than a dalmatian’s spots alone.

But as Old Trafford legend Paul Ince branded his old club “completely scared” to play, and as disoriented as “deer in headlights,” Lukaku’s struggle has become a focal point for United’s nightmare start.

Ince warned the ‘Theatre of Dreams’ had lost its aura as a fortress, and Juventus “walked all over United” in midweek, because of manager Jose Mourinho’s failure to make £400 million worth of signings play like the sum of its parts.

Lukaku – four goals in 13 appearances this season – has gone eight games without scoring, and Ince says the £75m striker simply isn’t capable of becoming the No.9 Mourinho wants.

Didier Drogba and Diego Costa fired Mourinho to three Premier League titles at Chelsea, but Lukaku didn’t even manage a single shot in the Champions League defeat by the Old Lady on Tuesday night.

Ince warned: “It looked like Romelu Lukaku was trying to do something against Juventus – the only issue is, no matter how hard he tried, he just wasn’t capable.

“When you are at United, you must perform at seven or eight out of 10 every week. I’m not sure he has the ability to do that.

“It’s obvious that he needs help. There’s no doubt he can score goals – you can see it from his record. But playing for United is about more than that.

“He constantly loses the ball, throughout every game. But as an ex-player, if my control and retention of the ball wasn’t great, I’d be out there every single afternoon, getting it right.

“It makes you wonder what he’s working on in training because we’ve never seen an improvement on it.

“You can’t always blame the manager – sometimes you need to take responsibility for your own performances.”

I’ve come to talk with you again ”

For Manchester United fans, there is no more pertinent song right now than The Sound of Silence.

Because for every one step forward, it seems there are two steps back.

Against Chelsea, Anthony Martial showed his class with two goals and they were minutes from victory.

Then Juventus in midweek saw an attacking display that was completely lacking and the Red Devils were comfortably beaten by the Italian champions.

Now, sitting 10th, they are back in Premier League action against Everton this weekend, with the Toffees rejuvenated.

United have only five wins in all competitions, and Marco Silva’s men have won their last three in a row.

It’s not going to be easy for United, with Romelu Lukaku so badly out of form, to get back on track (again).

Jose Mourinho will be talking this morning on the subject – what will he have to say about his side?

Keep up with it all here..

Sheebah reveals the man that sexually harassed her
Andrew Mwenda responds to allegations of sexual harassment against Sheebah
FireBoy finally in Uganda ahead of his Lugogo concert tomorrow
PHOTOS: MP Francis Zaake proposes to long time baby mama
Sheilah Gashumba should divert the energy she is putting on me to Rickman- Crysto Panda hits back
PHOTOS: GNL Zamba shows off his new multi-million mansion
Tweet Share
Previous Post MC Kats And Fille Allegedly Broke Up To Promote Fille’s Upcoming Song
Next Post LIST OF THE DEAD: “Erias Lukwago, Mayiga, Bobi Wine, Betty Kamya Top List Of 16 People To Be Killed”