Museveni, who was speaking on Thursday after the commissioning of the National Command Centre at Naguru police headquarters, said with available technology, crime won’t be minimized if there are still elements of non-committed police personnel.

The IGP was tasked to ensure all officers who are not taking their jobs serious to be wiped out with immediate effect so that the police force can remain with people who are determined to protect all Ugandans.

Museveni said all police officers must be determined to die for Ugandans just like they would not allow anyone to harm their biological children. He said police officers should be like him who fought because he loves Ugandans.

The National Closed Circuit Television –CCTV security command will be monitoring all other control centres established at various Districts and Divisions headquarters including those in rural areas.

President Museveni said he was forced to shift from analogue style of policing and investigations due to back to back killings that seemed to be difficult to investigate because detectives had to rely on public information like who saw what, who saw who. 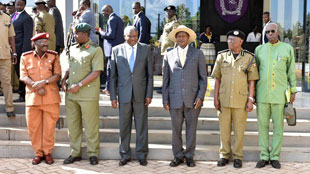 The process of installing CCTV cameras worth more than 500 billion shillings started in 2016 but came into life last year when cameras were erected in various parts of Kampala Metropolitan Policing Area- KMP that covers Kampala City, Wakiso and Mukono districts.

Museveni applauded Acting Director for Information Communication Technology –ICT Commissioner of Police –CP Felix Baryamwisaki, for passing his Adhoc test when he tasked him to show distant areas in Wakiso District as Namayumba, Masuulita and Gobero.

“I was able to see the marram road branching to Masuulita, River Mayanja and Katikamu. We have now implemented on the first phase of CCTV and the next phase is digital identification of each car or Boda Boda number plates,” Museveni said.

Museveni scoffed at criminals saying their target was to discredit NRM security achievement forgetting that it’s the constituency he understands best. He added that CCTV has already helped in fight crimes citing an example for killers of social worker Maria Nagirinya who were arrested after they were identified by cameras.

“It is evident that we are well on our way to tightening the noose on criminals who had become daring, including those who unfortunately thought they would use crime to discredit the NRM,” Museveni said.

CLICK to read speech by IGP Okoth Ochola at the occasion

Seven frontline health workers have tested positive for COVID-19 — extending Uganda’s tally to 417.The Ministry of Health in