England star Raheem Sterling has confirmed he was on the receiving end of racist abuse in England’s 5-1 win over Montenegro.

Sterling and team-mates Danny Rose and Callum Hudson-Odoi were all targeted by sections of the home fans in scenes branded as “not acceptable” by manager Gareth Southgate.

After scoring the fifth goal, Sterling cupped his ears and approached the Montenegro fans in a clear message after receiving abuse.

He has now confirmed he was responding to racist incidents in a defiant tweet, declaring: “Best way to silence the haters (and yeah I mean racists)”.

The tweet was accompanied by a picture of his celebration along with the hashtag “get some education” as he blasted the home supporters.

Sterling later called on fans to be banned from the stadium.

“It’s a shame really because it was a massive team performance at a difficult ground, a difficult place to come,” he said.

“We knew how difficult it would be, we knew it would be hard at times but we stuck together as a team and there were some great performances in there today but then a couple idiots, mind my language, but a couple of idiots ruin a great night.

“It wasn’t just one or two people that heard it, I think the whole bench heard it and some of the families heard it.

“It is a shame we are talking about this to be honest with you, it is 2019 and I think there should be a real punishment for this, not just for the few people being banned.

“It needs to be a collective thing. This stadium holds 15,000 and I think the punishment should be that as a nation your fans are chanting racist abuse so I think it should be the whole stadium can’t watch it. 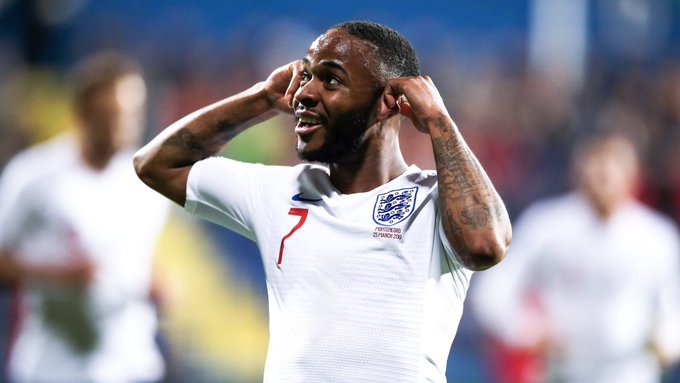 England boss Gareth Southgate confirmed after the game that they plan to report to incidents to Uefa after confirming he heard abuse directed at Danny Rose.

“I definitely heard abuse at Danny Rose when he got booked at the end of the game,” Southgate said.

“There’s no doubt in my mind that happened.

Callum Hudson-Odoi also spoke out to condemn the racist taunts that marred his first England start.

He told BeIN Sports: “I don’t think discrimination should be anywhere you know. As I said, we are equal. You have to play a fair game and enjoy the moment.

“When you are hearing stuff like that from the fans it’s not right, it’s unacceptable and hopefully UEFA deal with it properly.

“When I went over there me and Rosey heard it … they were saying ooh ooh aah, monkey stuff.

“It’s not right at all. I was enjoying the game as well and to hear stuff like that is never right.

Raheem has always helped no matter what. He’s been talking to me about it and trying to say to me ‘listen, don’t worry about it’. It’s football, people do it. It’s not right in the game but you’ve got to stay strong.”

It is not the first time Sterling has been targeted by racists.

Bobi Wine to Besigye: Stand behind me

In a recent interview, Robert Kyagulanyi better known as Bobi Wine and leader of a fast growing youthful political

NIRA to issue over 150,000 National IDs to Wakiso residents

The National Identification Registration Authority-NIRA has finalized arrangements to distribute over 150,000 national identification cards to Wakiso residents that