Finally, President Yoweri Museveni’s ruling NRM party and the four opposition parties represented in parliament have something they agree on; aspiring Independent MPs must be failed at the next election in 2021. They accuse independents of opportunism.

“You have politicians who benefit from the branding and goodwill of the party and then turn around to fight it,” Democratic Party President, Norbert Mao quotes.

But the real reason behind the NRM and opposition party’s move appears to be fear and desire to control.

“Some Independents have become extremely disruptive,” Mao says, “All they do is fight the party. This is a legitimate concern. And if you have a problem you find a solution.”

The solution Mao and his fellow party leaders appear to have agreed on is to kick independents out of the parties and block their emergency at election time.

To deal with the Independent candidates, the political parties have worked with the Electoral Commission and came up with the Regulation of Independent Candidates Bill, 2019.

The National Consultative Forum (NCF), a platform that brings together all political parties registered by the (EC), adopted the Bill on April 17 at a retreat at a Hotel in Entebbe following a week’s deliberations.

Specifically, the Bill seeks to spell out the circumstances under which Independents participate in elections.

At the centre of the law is a provision that a person is only eligible to stand as an independent candidate for election if they are not a member of a registered political party. In case, they have been members of a political party, they must have ceased to be a member of that political party for at least eight months before the date of the election.

This clause is aimed at preventing situations where after losing party primaries, contenders jump out of the party and contest as independents in many cases even defeating party flag bearers.

If the move works as envisaged, it will give political parties more control on the selection process of parliamentary election candidates and also ensure they tow the party line while in parliament.

Not surprisingly, current Independent MPs do not like the move.

Legislator Cecilia Ogwal sees it as part of the growing intolerance within political parties. She says, as a politician who championed the push for the return of multi-party politics, she understands how important having rules of engagement is. But at the same time, she says, it is important for parties to leave an option where independents participate in elections.

She used her personal story to explain why. Towards the 1996 elections, Ogwal fell out with her party then—the Uganda Peoples Congress (UPC) after defying a directive issued by then party leader, Milton Obote, for members to boycott local council and parliamentary elections.

She successfully contested for the Lira Municipality seat and won. Then after successfully championing the return of multi-party politics in 2005, she found herself in trouble with the party again. By this time Milton Obote was dead and his wife Miria Obote and son Jimmy Akena were seeking to capture control of the party.

A few months later, however, she won the Woman MP seat for newly created Dokolo District.

“If the option of contending as an Independent was not exist available, I would have been denied an opportunity of serving my people who clearly still needed me to represent them,” she says.

Ogwal says that her troubles had nothing to do with the masses but the fact that a group within the party targeted her and a group of other UPC leaders, during the big storm that rocked UPC before and after the death of Obote. Indeed, around that time UPC lost several senior leaders to both the ruling NRM and FDC.

When she later joined the FDC, Ogwal says she saw colleagues encountering similar problems as she had encountered in UPC.

She cites the cases of Kitgum Municipality MP Beatrice Anywar and Aswa County MP Reagan Okumu as some of the contradictions that have caused problems for political parties.

Ahead of the 2016 elections, Anywar was gunning for Kitgum Municipality but apparently, FDC handpicked Denis Onekalit as FDC flag bearer.

“There were no primaries. Worst of all my nomination papers, which had been signed by FDC members, were stolen at the last minute when I was seeing Dr Kizza Besigye at a hotel in Kitgum,” Anywar told The Observer in July 2016, “I had to go back to the EC and pick other forms with a day to nomination. I am independent against my own wish because my party messed me up.”

Meanwhile, Reagan Okumu, then the FDC Vice Chairman for northern Uganda was in 2016 forced to contest as an independent after Gulu High Court in December 2015 declared Christopher Acire to be the rightfully nominated FDC flagbearer for Aswa County.

Okumu won the election as an Independent but is still recognised as an executive member of FDC. This, critics have pointed out, contradicts the party constitution.

But Ogwal says cases like these explain why you have enlarging numbers of Independent legislators in parliament.

“People are treated unfairly by parties,” Ogwal told The Independent, “That is partly why they lose primaries but win the general elections. This is the experience we have been witnessing. That is why for as long as we do not have true internal democracy with in parties, we should not take away the option for people to run as Independents.”

But for both the leaders of the opposition and the ruling party, Independents are becoming a real threat and one they must deal with now.

A look at the numbers confirms the fear that parties have of the growing presence of Independents in parliament.

In terms of growth, therefore, the Independents grew by 16% between 2006 and 2011 and in the last election, by a staggering 53%. If they were to maintain that streak, they could grow by a whopping 90% in 2021. If we were to extrapolate, there is no doubt, which would bring their numbers to 125 MPs or 30% of parliament. With that, the Independents can start calling the shots. 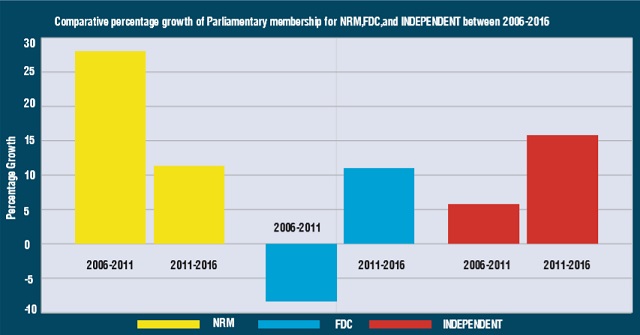 Combine these numbers with the so-called Bobi Wine wave – phenomenon behind parvenu legislator, Kyagulanyi Sentamu aka Bobi Wine’s easy defeat of candidates fronted by bother the ruling NRM and FDC in the Kyadondo East by-election in 2018. He ran as an independent. Despite being new on the political scene and appearing unprepared without any established party backing, Bobi Wine won easily with 78% of the vote.

Bobi Wine also worked with a small group of Independents and some opposition MPs in a bid that almost failed the ruling party from lifting amending the constitution to remove the 75-year age limit. The ruling party had to fall back on the military to beat the MPs into submission before the constitution could be amended. It now appears Museveni does not want groups of MPs he cannot control.

And in a few months, Bobi Wine, the Independent with no party structures no huge wards of cash has become a kingmaker of sorts. He ensured that candidates he supported in subsequent elections won.

Both FDC and NRM had thrown their all behind their candidates. Museveni and Besigye campaigned for their respective candidates. They lost.

In the Arua Municipality by-election, NRM was looking to retain the seat that was previously occupied by a party stalwart, Ibrahim Abiriga, who had just been murdered.

Wadri and FDC’s Bruce Musema’s votes combined were slightly above 7000. On the other hand, NRM’s Tiperu and the other five party leaning independents had over 9000 votes combined.

“NRM lost because of internal dynamics,” NRM’s Ofwono Opondo lamented blaming the loss on messed up party primaries, which he claims divided the ruling party’s support and gave chance to an independent candidate.

Indeed, during the 2016 elections, Museveni struggled with several NRM-leaning independents who were challenging party flag bearers.

Armed only with his `people power’ slogan and popularity as an artist, Bobi Wine has disrupted the political landscape in Uganda.

And ahead of the 2021 elections, Bobi Wine is seen as the most popular contender against President Yoweri Museveni.

The existing tensions between his camp and that of Kizza Besigye, who has until recently been the defacto leader of opposition in Uganda having challenged President Museveni for four times in vain speaks volumes of Bobi Wine’s political clout as much does the fact that other opposition leaders like Mao and former FDC Mugisha Muntu’s efforts to quote the youthful legislator.

As Bobi Wine’s popularity soars and Independents continue to eat into the share of political parties, it makes sense that the parties are fighting back. But since the muddy party primaries will inevitably results in fallouts as some aspirants are either locked out of the race or feel cheated at the ballot, it remains what form the Independents – who are provided for in the national constitutional order – will take by 2021.

Mao says that no one should interfere with people’s constitutional right to participate in elections but at the same time, people should not attempt to eat their cake and have it.

“If a party doesn’t meet your needs the best option is to leave it but not to stay in it and keep fighting it,” Mao says, “That doesn’t foster constitutional development.”

He says the Political Parties Act provides for the establishment of regulations on how to participate as an Independent and that is what the NFC has been trying to put in place with that law.

“They have looked at how other countries have done it,” he says.

Mao says that in the process of finding out what works, the NFC looked at what other countries have done.

In Zimbabwe, they completely abolished independents. In Kenya, for one to become an Independent, they should not have associated with a political party for a period of time.

But others are viewing the motive of the law suspiciously. Crispin Kaheru, the coordinator Citizens’ Coalition for Electoral Democracy in Uganda (CCEDU) told The Independent that while on the face of it, the law appears intended to strengthen multi-party politics in the country, it could be aimed at curbing the growing strength of independents in parliament.

“Creating certainty is important for multi-party politics and to that I think establishing a legal framework that regulates the participation of Independents is legitimate. But, under the circumstances, this law appears aimed at targeting individual independents. In bringing an independent law, one senses a temptation to target the legitimate independents.”

He says that if the political parties were only looking at preventing political opportunism, they would start by establishing strict guidelines envisioned by the Political Parties Code of Conduct that has for years been gathering dust in parliament.

He says the law to regulate independent candidates appears part of the big plan for the establish parties to consolidate their privileged position in the politics of the day.

“It is a contentious issue,” Mao says, “But people should put their cards on the table and debate it in good faith.”

Arsenal have twice rejected the chance to sign Philippe Coutinho from Barcelona over the last year, it has been

Lord Mayor hopeful Joseph Mayanja alias Jose Chameleone is bedridden. He has reportedly in the last 5 days been admitted

Andrew Mwenda, a Veteran Journalist has Friday registered and joined as a member of Bobi Wine’s National Unity Platform